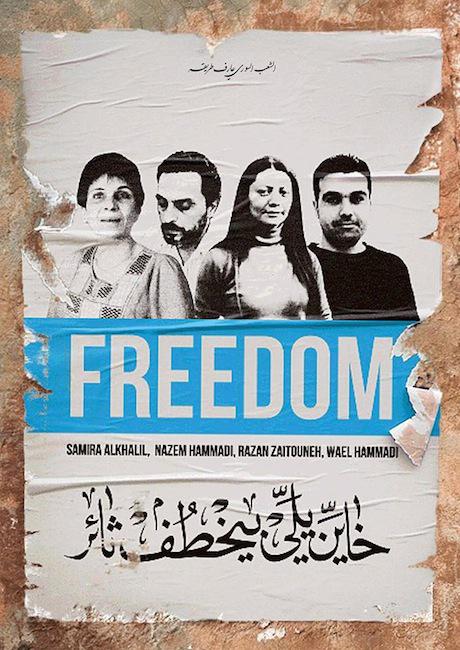 A statement by the Violation Documentation Center (VDC) and the Local Development and Small Projects Support Office (LDSPS) regarding the kidnapping of activists Razan Zeitouneh, Samira Khalil, Wael Hamada and Nazim Hamadi 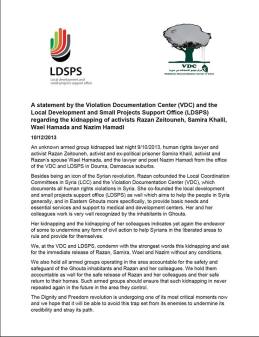 Besides being an icon of the Syrian revolution, Razan cofounded the Local Coordination Committees in Syria (LCC) and the Violation Documentation Center (VDC), which documents all human rights violations in Syria. She co-founded the local development and small projects support office (LDSPS) as well which aims to help the people in Syria generally, and in Eastern Ghouta more specifically, to provide basic needs and essential services and support to medical and development centers. Her and her colleagues work is very well recognized by the inhabitants in Ghouta.

Her kidnapping and the kidnapping of her colleagues indicates yet again the endeavor of some to undermine any form of civil action to help Syrians in the liberated areas to rule and provide for themselves.

We, at the VDC and LDSPS, condemn with the strongest words this kidnapping and ask for the immediate release of Razan, Samira, Wael and Nazim without any conditions.

We also hold all armed groups operating in the area accountable for the safety and safeguard of the Ghouta inhabitants and Razan and her colleagues. We hold them accountable as well for the safe release of Razan and her colleagues and their safe return to their homes. Such armed groups should ensure that such kidnapping in never repeated again in the future in the area they control.

The Dignity and Freedom revolution is undergoing one of its most critical moments now and we hope that it will be able to avoid this trap set from its enemies to undermine its credibility and stray its path.